Ashley moved to the area 14years ago he soon became actively involved in the community with the development of Waddesdon Hall. As a result of a by-election in 2017, He was elected to Aylesbury District Council which he represented until the new Buckinghamshire Council came into existence in 2020. He has been a keen advocate of community transport in coordinating the development of the Bernwode bus and Buckingham area rural transport, These organisations have been vital during covid by organising weekly food bank collections supporting those in need. He is also a trustee on two local charities, The Wednesday Club, which aims to combat social isolation with a weekly social club for elderly residents in the area and Bucks Inspire, a new venture which aims to help unprivileged children across the whole of Buckinghamshire in a variety of ways. Living in the area he shares your concerns about the problems caused by HS2 & EWR and any new proposed developments, Ashley will do all he can to protect our rural environment.

At the end of last month Buckinghamshire Council opened a consultation on a proposal to prohibit motor vehicles on Russet Street which runs until 27th May.

Buckinghamshire Council would like your thoughts on the proposed upgrade work between the Paradise Orchard/Sir Henry Lee Crescent junction and the Rabans Lane junction on the busy A41 Bicester Road, Aylesbury.

In very hard times, the worst since the Second World War in fact, it's amazing to see how strong our resilience has been, the effort local residents and volunteers have pooled to come together in a such an awe-inspiring way this year has been truly inspiring.

After learning that the Rotary Club would not be visiting Fairford Leys with Santa this year due to COVID-19 the team at Bernie the Bernwode Bus stepped in to deliver some Christmas Cheer to the Children in the village. 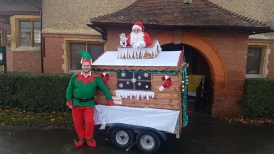