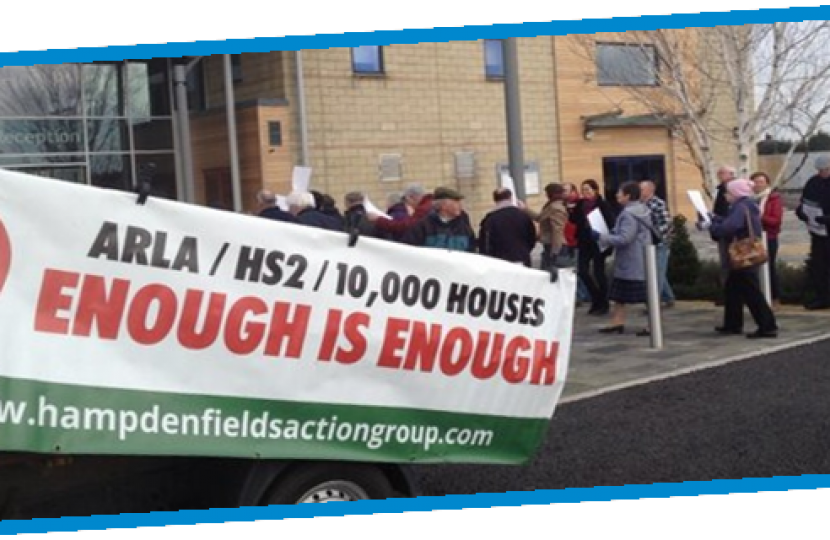 Cllr Mark Winn said, "Today I’d like to speak not only as a Cllr, but as a resident and a commuter who uses the Wendover road every day to get to and from work and already experiences how bad the traffic is becoming on our roads.

The Cllrs on this committee have the chance here to make a historic decision for the future of this town and the vale. Do we keep massively expanding Aylesbury without the required improvements to our infrastructure?  or do you today draw a line in the sand and say Hampden Fields would be a step too far, a step that would damage our economy, our environment in Aylesbury and the wider vale and that because of this it is not a sustainable development? I would urge that it would definitely be a step too far.

Firstly: We of course recently decided as a council that we only build about 800 homes over the next 15 years over and above what is already in the pipeline in the Vale of Aylesbury Plan and that any development should contribute towards infrastructure and that one of those contributions must be an Eastern link road. In taking this decision we had of course listened to the people of Aylesbury and the Vale who have been saying for so long that we cannot continue just to allow more and more development without investment in our infrastructure, particularly our roads.

This proposed development of 3,000 homes offers no extra infrastructure it just further ruins the infrastructure we have and they are appearing before you today because they want to attempt to sneak in before the Vale of Aylesbury plan is in place and if you say no to then go to the planning inspectorate. This  does not bode well for local democracy and the right for local people to make decisions over how much development they think is acceptable.

But if these are not enough reasons on their own for objecting to this proposed development let’s examine why it isn’t a sustainable under the National Planning Policy Framework (NPPF).

Transport:  This proposed development would have a detrimental effect on two major routes into and out the town the A413 Wendover and A41 Tring roads which this proposed development sits in between. On the A41 traffic would according to the developers own figures increase by anything by up to 48% and 34% on the A413 and Main Street in Weston Turville would see traffic levels increase by 83%, turning it from a quiet country lane into a busy road.

The developers try to make big claims about having a so called link road. Let’s call it what it is it is not a link road it is an access road that goes through the middle of the proposed retail park and residential area and will bring  thousands of additional cars onto Aylesbury’s already congested roads.

What with ARLA fully opening this year and HS2 looking like it may get the go ahead is there much more traffic Aylesbury can take without damage to its economy and to the people that try to live here. No firm will want to locate here when our roads are congested. This development offers none of the required roads infrastructure Aylesbury needs, it simply is not sustainable as a result of the effect it would have on the roads infrastructure and as Transport for Bucks says there is no consideration that this development could take place without having a severe impact on the existing highway network.

On the natural environment too this development fails the sustainability test. It would change Aylesbury from being a town surrounded by villages to one in which it would expand to bring those villages such as Weston Turville within the Towns boundaries . To remind this committee one of the reasons you rejected Fleet Marston was because it would spoil the views from the Quainton hills, well this one would most definitely spoil the views from the slightly better known Chiltern hills. It would lead to the loss of valuable high quality farmland used for the growing of food, hedgerows and trees which are important as either permanent wildlife habitats or wildlife staging posts.

In conclusion to the question as to whether this is a sustainable development in line with the National Planning Policy Framework I think it definitely isn’t. No attempt is made to protect the interests of future generations, it provides no extra infrastructure and does not meet the needs we have now for improved roads and a better rail link. Any economic benefits it has are outweighed by the harm it causes by overloading vital pieces of infrastructure to near breaking point or by the harm it causes to our environment. It will lead to the inevitable decline of Aylesbury, can I remind this committee that Aylesbury recently dropped down the Halifax Quality of life survey, coming a disappointing 37th in 2012. One of the reasons for this drop was given as lack of infrastructure, and over development.

“as to whether it can reasonably be described as a sustainable development”.

Hampden fields isn’t a sustainable development and therefore for the good of Aylesbury and the wider vale you must reject this planning application."